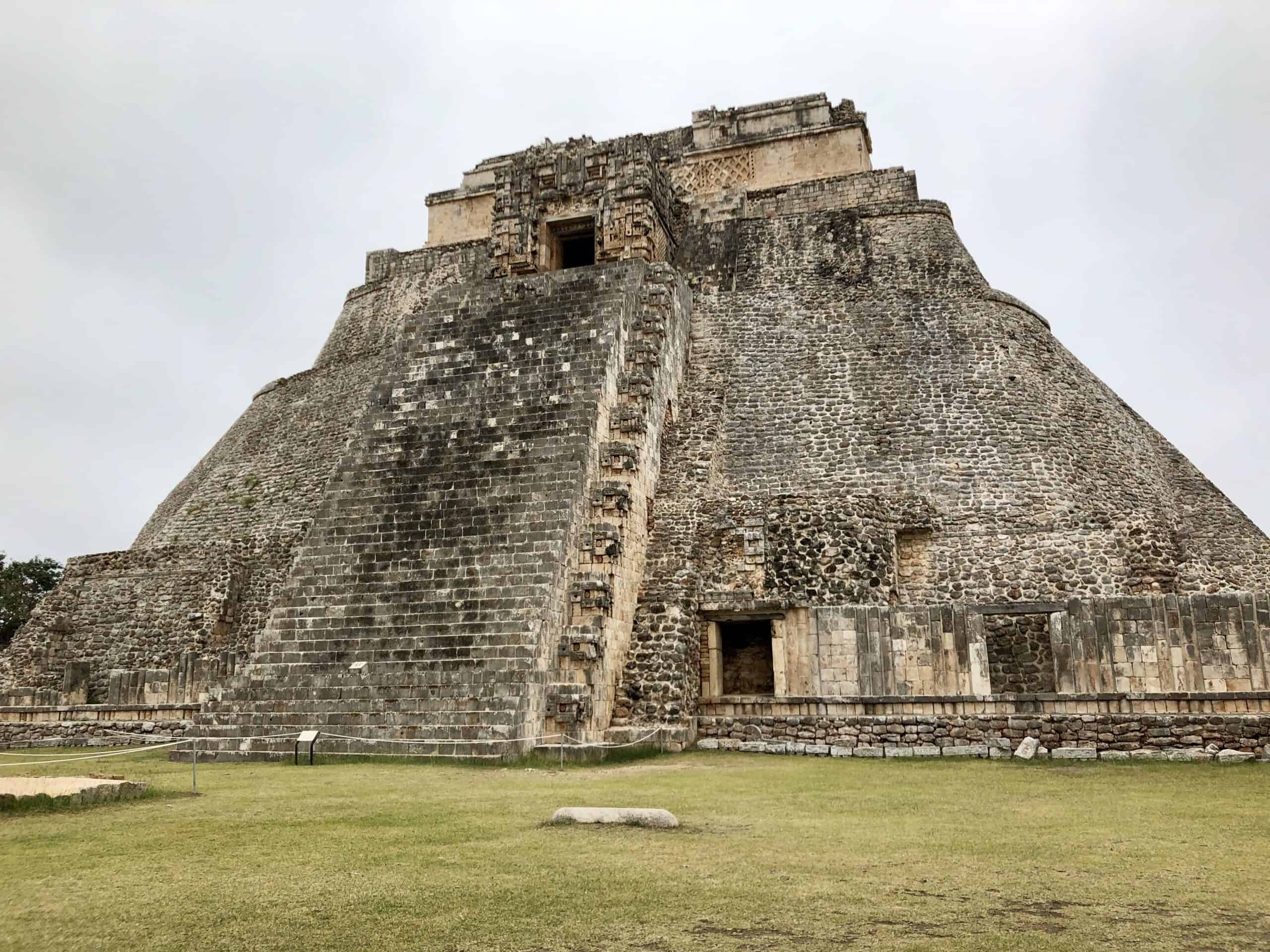 I love seeing the buildings of great ancient civilisations – it’s the one thing that I most look forward to when travelling – and so I always check the map for the nearest UNESCO World Heritage sites wherever I go. On learning I had a spare weekend coming up between work (with the wife and kids across the pond) during a particularly cold January, I looked up budget flights to see if I could go somewhere warm for the weekend with some interesting history. What about Mexico?

I’d need a bit of time after finishing work on Friday to get to the airport, and would have to return Sunday early evening to get enough rest before work again on Monday, so that meant just 36 hours at my destination – I needed to make it count. I initially considered a return flight to Cancun with the aim of seeing at least Chichen Itza, but on looking at the map I noticed that Uxmal was close enough to make two UNESCO World Heritage sites a realistic proposition if I could reduce some of the time spent on the road. There was a straightforward solution: fly into Merida, book a one-way car rental, and fly back from Cancun!

I was starting in Toronto, but you can get similar flights from most major cities in North America. Direct flights to/from Cancun are not hard to find but getting to Merida will usually mean a connecting flight (likely via Mexico City, unless you’re coming from Florida).

The itinerary – no need to rush

I flew overnight and arrived in Merida just after 7am on Saturday. The car rental places were just opening up as I landed and I was in a nice big Kia 4×4 (it was either that or a minivan!) pretty soon after. My mobile network offered free roaming in Mexico, so I just fired up Waze and started making my way to Uxmal. I was at the archaeological site for opening time!

Hop across to the UNESCO website for an explanation of why the ruins at Uxmal and its related towns along the Ruta Puuc are so important to our understanding of Mayan history. It’s a fascinating place to explore and ponder history, and at the time I visited you were permitted to climb one of the pyramids in the complex (although not the main one!) and, as you’ll notice from my photos, an early morning visit means hardly any crowds!

The five sites along the Ruta Puuc are just 36 miles apart, so you can see quite a lot in one day without feeling rushed. So, having spent the morning at the main Uxmal site, I got back on the road just before noon and arrived at Sayil. People had woken up by then so I no longer had the place to myself, but it still wasn’t too busy.

I drove past the other sites (Xlapak & Kabah, which are worth some hours exploring!) but was getting tired – I didn’t get much sleep on the flight overnight – so thought it best I get on the road to Chichen Itza.

You’ve probably heard of Chichen Itza but it’s worth a quick hop to the UNESCO site to learn why it’s is such a great archaeological site, contributing to our knowledge of both Mayan and Toltec civilisations.

I chose to stay at the Mayaland Hotel & Bungalows, purely because they have a back entrance to the Chichen Itza site and thus easy access to dawn tours (prior to the site’s actual opening) starting from the hotel’s reception. If you stay elsewhere, I would advise getting to Chichen Itza for opening time as it’s a busy site for tourists – and traders!

There’s also a night tour of the site that starts after closing time, with a light show projected on the main pyramid. I went along out of curiosity, but it’s not as cool as seeing it in daylight.

The dawn tour started around 6am the next morning in an almost completely deserted site, and having a 1:1 tour guide demonstrate the site’s acoustic features was pretty awesome – this includes the ability to hear people almost 500 ft away and the ability to create a sound effect mimicking the chirp of a quetzal bird (sacred in Mayan culture) by clapping at the base of the pyramid.

Crowd-free dawn tour over, I exited the site just as it was getting busy and headed to the breakfast buffet. I didn’t get much of a chance to look at the traders’ wares either, as most were still setting up!

I needed to be near Cancun for my flight out in the evening so began to make my way across to the state of Quintana Roo after checking out. My first stop was Coba, a fantastic archaeological site that – unlike Chichen Itza or Uxmal – still lets you walk up its main pyramid (Nohoch Mul).

My final stop was Tulum, an archaeological site south of Cancun, along the east coast on the Caribbean Sea. It was a walled city, one of the last inhabited by the Maya – holding out some 70 years into the Spanish occupation of Mexico.

At that point, God sent absurdly heavy rains to remind me of the need to make my way back to Cancun for the flight back, so I dashed to the car and drove past all the cool new hotels to the airport.

It was a great trip and I can’t wait to come back to Yucatan – the safest state in Mexico – and be a proper tourist! There is so much to see – and even more UNESCO World Heritage sites within driving distance such as Calakmul, Sian Ka’an and Palenque further inland. Across the border in Guatemala is yet another amazing Mayan site at Tikal. Might need a whole week next time!

All photos taken by me on an iPhone X: all rights reserved.