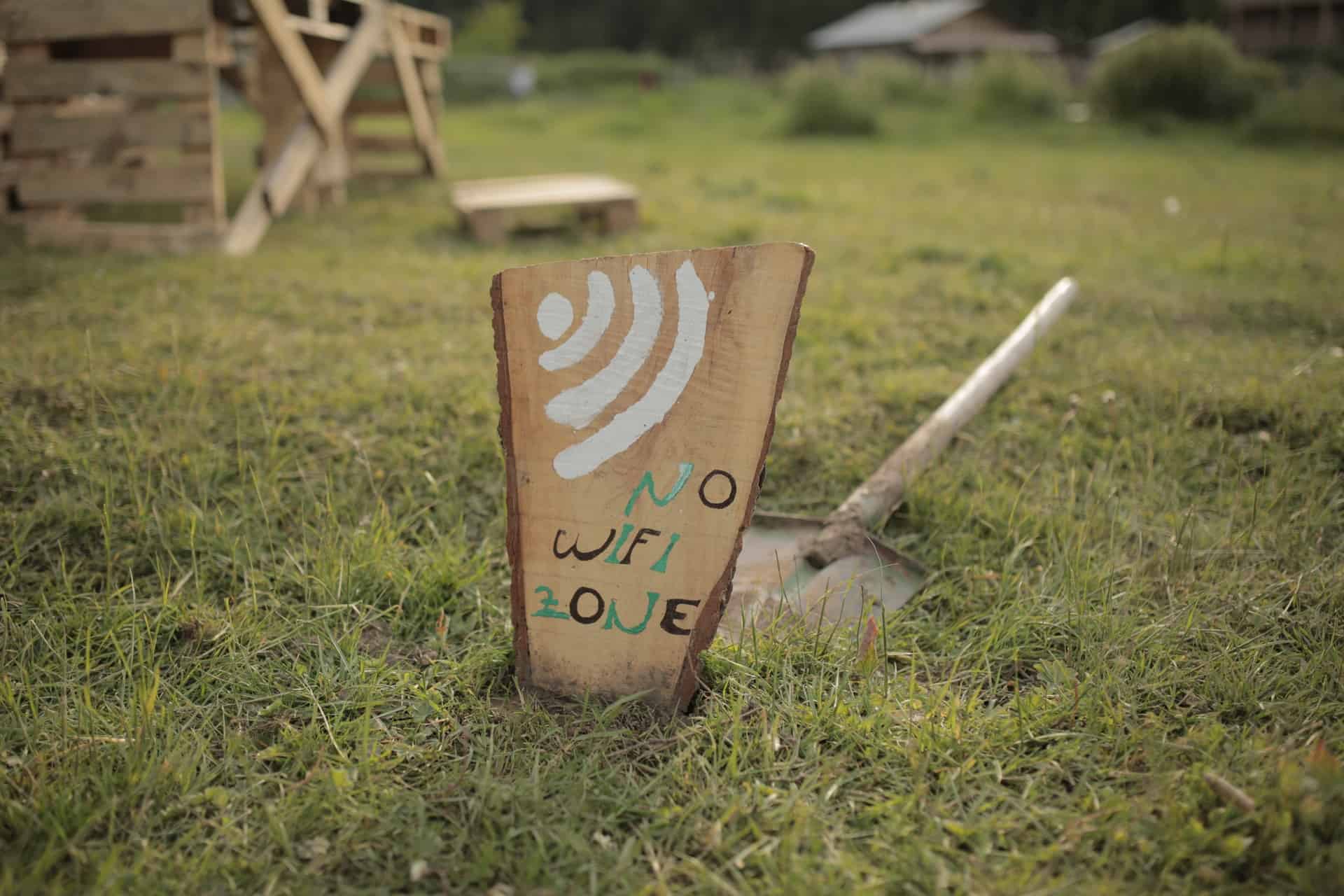 When we had fewer kids and a smaller two-storey home, we didn’t spend any time thinking about wi-fi routers – the one the broadband provider gave us was always sufficient. We later extended our home – with our daughter coming we needed more bedrooms! – but still didn’t think too much about wi-fi; the kids were too young to have their own devices so connectivity in the furthest parts of the home still wasn’t a consideration. Lockdown changed all this – I was working from the loft and started experiencing VPN disconnections and jittery video calls. Something had to be done! But what?

I contacted my broadband provider and they sent me a pair of powerline adapters. And so my saga begun…

Powerline adapters transmit over your home’s electricity cabling. In short: You plug one adapter into a power socket near your router and (typically) connect the adapter to your router with an ethernet cable, and then plug the other adapter into a socket in the part of the home you have the worst connectivity – and hey presto, wifi coverage everywhere! For most homes, provided the mains power comes off a single main meter, the distance between points is practically unlimited.

So why doesn’t everyone use powerline? Unfortunately, while it’s a simple solution it has some unfortunate challenges – the most significant being interference.

After installing it, it was great for a few days. But when I plugged in the AC adapter for my gaming laptop nearby, the connection was disrupted; download speeds and latency slowed to a crawl. The next morning, a hairdryer plugged in on the same floor had the same effect. Over the course of the week, I realised that the connection would become unusable when a device with a transformer (most chargers) or a high-power device (like a hairdryer) was plugged in nearby. The adapters can more easily correct for the interference for things that are always drawing power (e.g. a WFH laptop that’s always plugged in), but things that go on & off or have major swings in power usage were troublesome.

Don’t discount powerline though: Depending on the wiring in your home and the sort of devices you use, you may have a very different experience – if you’re able to keep interfering devices away from the loop that your powerline adapters are on, then you’ll likely have no problems at all. For me, banning a family of 6 from using such devices near the powerline adapters was unrealistic, so I realised I needed to try something else.

These are often promoted as the ultimate wi-fi solution and they’re generally pretty expensive. You’ll have a primary device that plugs into your main broadband router/modem – you’ll need to switch your provider’s router into modem mode for it work (it may work without doing so, but you’ll likely have trouble and interference problems if you don’t) – and then one or more satellites that you’ll place in locations around your home that are far enough away to expand coverage, but close enough to the primary device to maintain a strong wireless connection (but more on this later).

This usually means you’ll need more than one satellite for a large home with more than four bedrooms or three storeys, and each satellite is a fair chunk of money.

Backhaul: hard backbones are better than soft ones

In wireless lingo, ‘backhaul’ refers to the method the mesh satellites use to communicate with the main point and with each other. Mesh systems are at their most reliable when the satellites are connected to the primary point with ethernet cables instead of being connected wirelessly. This ensures the best range and reliability – allowing you to site satellites further apart – as well as the best speeds and latency, and leave more of the wireless spectrum free for your devices.

If you have ducts in your home for central air, or holes left from old pipework, then a little time spent routing ethernet cables through them will give you a lifetime of reliable connectivity – and potentially a significant cost saving from buying fewer satellites. Cat 6a ethernet cables are generally sufficient for most people (supporting speeds up to 10 Gbps, an order of magnitude faster than what most broadband providers are offering right now) but if you’re worried about future-proofing – and if replacing cables later would be too disruptive – then you may want to go for cat 8 cables which support speeds above 25Gbps. If your home is particularly large please note there are length restrictions: cat 6a cables can’t go beyond 100 metres (328 ft) in length – half that if you want the higher 10 Gbps speeds – and cat 8 cables can’t go beyond 30 metres (98 ft).

Wireless backhaul – some are better than others

If running cables through your home isn’t an option, you may have no option but to rely on wireless backhaul, and you’ll need to ensure each mesh point is close enough to another to maintain a strong wireless connection with it. For large homes bear in mind that each additional ‘hop’ (from satellite to satellite until it reaches the primary one) will result in a slightly slower speed and higher latency, but the difference is unlikely to be significant enough for most people to notice.

Mesh systems on the market have two main ways of maintaining wireless backhaul: some (e.g. Netgear Orbi) use a dedicated part of the wireless spectrum for communicating between mesh points, and broadcast your wifi network on a different part. This generally means greater range (so points don’t need to be as close to each other), and the resulting reduction in hops means better speeds and latency. Others (e.g. Google Nest Wifi) use the same part of the spectrum for both backhaul and your wireless network. From a total cost perspective these generally work out the same: the former tends to be more expensive per unit, but you’ll need fewer points, and the latter is definitely cheaper per unit but you may need more satellites to achieve the same coverage.

On a Mac, if you hold down the ‘Option’ key and click on the wireless network icon (either in control centre or on your top menu bar), you will see a bunch of diagnostic info including the self-explanatory Received Signal Strength Indicator – ‘RSSI’ (this is measured in dBm and displayed as a negative number, so if you’re pedantic about your maths, I’m ignoring the negative sign and talking about the absolute value here).

A smaller (closer to zero) RSSI figure is always better and you’ll ideally want it at 65 or smaller at all times for reliable use. When you’re thinking about where to place your satellites, I would check this a few times throughout the day/week to see what the worst figure is before moving anything.

iPhones and iPads will connect over the 5 GHz wireless band (best for speeds) provided the RSSI is smaller than 65. As it gets worse and hits 70, they will start looking for another point to connect to with a stronger signal. Macs and MacBooks have bigger antennae so can cope with weaker signals: they will connect over the 5 GHz channel when the RSSI is 68 or smaller, and will only start looking for another point when the RSSI hits 75.

Choosing a channel, if you have to

It’s unlikely you’ll need to choose a specific wifi channel yourself, as most new routers and mesh systems will pick the least congested channel automatically. That said, it’s possible that the least congested channel will differ between your main point and the satellites around your home, particularly if you live in a built-up area, so you may need to consider changing this manually if you’re experiencing more interference than you expect in one part of your home.

If you have to do this: you’ll need to get hold of a wifi spectrum analysis tool (e.g. WiFi Explorer) and then walk around your home taking a note of what channels other wifi networks are using and their signal strength at various points around your home. Pick a channel no-one else is using (if you’re lucky!) or failing that pick one with the weakest competing signal.

I’m hoping this will help you avoid some of the headache I had this past year! If there are any other tips or tricks that you’ve found useful, please let me know in the comments!

Photo by Discover Savsat on Unsplash