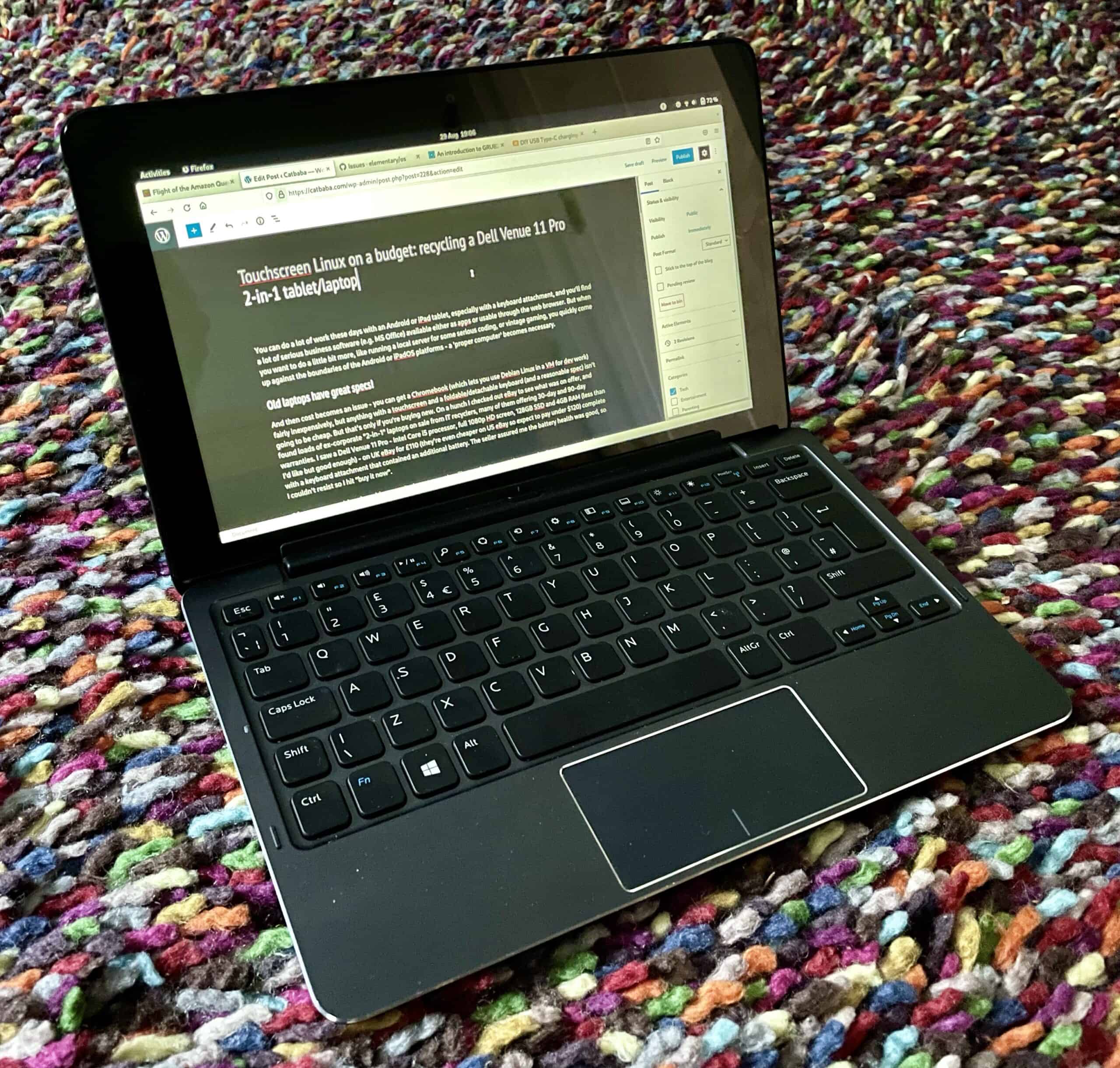 You can do a lot of work these days with an Android or iPad tablet, especially with a keyboard attachment, and you’ll find a lot of serious business software (e.g. MS Office) available either as apps or usable through the web browser. But when you want to do a little bit more, like running a local server for some serious coding, or vintage gaming, you quickly come up against the boundaries of the Android or iPadOS platforms – a ‘proper computer’ becomes necessary.

And then cost becomes an issue – you can get a Chromebook (which lets you use Debian Linux in a VM for dev work) fairly inexpensively, but anything with a touchscreen and a foldable/detachable keyboard (and a reasonable spec) isn’t going to be cheap. But that’s only if you’re buying new. On a hunch I checked out eBay to see what was on offer, and found loads of ex-corporate “2-in-1” laptops on sale from IT recyclers, many of them offering 30-day and 90-day warranties. I saw a Dell Venue 11 Pro – Intel Core i5 processor, full 1080p HD screen, 128GB SSD and 4GB RAM (less than I’d like but good enough) – on UK eBay for £110 (they’re even cheaper on US eBay so expect to pay under $120) complete with a keyboard attachment that contained an additional battery. The seller assured me the battery health was good, so I couldn’t resist and hit “buy it now”.

Of course, second-hand machines aren’t always smooth sailing so don’t expect the same day 1 experience as buying new. In my case, a bunch of keys on the detachable keyboard weren’t working, so I messaged the seller who sent a replacement out the next day. Everything else was as described; it seemed the previous corporate owner had used it for a short period before moving onto new devices, and the BIOS reported excellent battery health – easily allowing a day’s usage.

Charging – micro-USB, but not as you know it

You’ll almost always get a charger when buying from eBay but there’s quirks to watch out for. The Dell Venue 11 Pro has a port at the bottom (a wide non-standard socket, opposite the camera end), which is not accessible when the keyboard is connected. So if the charger you get uses the bottom port, there’s a bit more trouble ahead. You’ll notice a micro-USB port on the side, which is for charging only, but there’s no USB-PD (Power Delivery) support, so even if you plug in a high-wattage USB charger (e.g. phone fast charger) it’ll draw < 5W which means the battery will still drain during use (and will take more than a day to charge when off/suspended). Rather, this Dell model needs to receive power at 19.5V (and between 1.2-1.5A, i.e. 23 – 30W) which no normal USB/phone charger will do – and the same goes for the second battery inside the keyboard attachment, which can also be charged directly (otherwise it charges when the main touchscreen is plugged in). Fortunately there’s plenty of compatible chargers available on eBay or, if you’re comfortable with a soldering iron, you can make your own for well under $5! Just be careful you don’t plug one of these into a phone as the high voltage may fry the electronics – the original Dell charger had a secondary 5V mode to prevent this happening, but most replacement chargers sold online offer only a single mode between 19-20V.

Installing Linux and choosing a distro

It came with Windows 10 which works pretty well in tablet mode, and has a good 1.5x zoom option for devices like these that have a small but high-resolution screen. But of course I wanted to tinker, so the first order of the day was to install Linux. I won’t cover how to write a live USB here (there’s loads of guides online) but it’s worth noting the Dell Venue models also have a microSD card slot which you can also boot from – both by holding the volume + key as soon as you see the Dell splash screen when powering on.

If you’re unlucky, the previous owner may have password-protected some of the BIOS settings and the IT recycler might not have fully unlocked it – since it’s possible to format and reinstall Windows without BIOS access. However, doing things like changing the boot order will require BIOS access and you’ll want to ensure there’s no weird settings impacting performance. If your BIOS requests a password, don’t fret – there are online resources that’ll help you unlock it for free such as bios-pw.org.

With that out of the way, which distro do we choose?

I first tried elementary OS as I’m a regular macOS user and heard it was similar. Unfortunately the desktop environment (Pantheon) was less fully featured than I expected and some key features didn’t work ‘out of the box’ e.g. it didn’t auto-rotate the display (despite this being enabled in settings) and there was no way to adjust the brightness of the display – but bear in mind I’m talking about this specific Dell model here, so you may have better mileage on another device. While it supported touch gestures, it clearly wasn’t designed with pure touchscreen use in mind, and basic issues like registering scrolling as zooming made it almost unusable for day-to-day use.

So I did a bit of Googling on what Linux desktop environment was best for touchscreens, and the consensus seemed to be GNOME. The latest (GNOME 40) was available on the stock install of the Fedora and openSUSE distributions (well, and Arch Linux too, but I’m not gonna go there!) at the time of writing, so I plumped for Fedora, installed its media creator and wrote a new live USB (or rather, live microSD card).

Fedora was a dream – everything just worked. The touchscreen worked smoothly (no gesture/touch confusion) and auto-rotate and auto-brightness all worked ‘out of the box’. It also booted and installed without requiring any fiddling with parameters in grub (more on this later). It even puts a little ‘Fedora’ logo on the Dell boot screen, and offers an on-screen keyboard when it recognises the keyboard isn’t attached! I made one change, enabling ‘large text’ in accessibility settings which helps with readability given the 1920×1080 resolution on a sub-11″ screen.

Another thing to bear in mind with old hardware is that a lot of the features we’re used to – from graphics to power management – were less mature back then, and this may cause unexpected behaviour with modern OSes that expect everything to work.

Black screen on booting into Linux?

Some Linux kernels don’t play well with the Intel graphics on this range of models – I noticed this with elementaryOS: while I could boot from the Linux live USB, it wouldn’t load past the splash screen – I just got a black screen. Turns out that’s a known issue, and Dell even has a support page on how to fiddle with grub to fix it by adding the nomodeset parameter. After installing elementaryOS, I then couldn’t boot into it because of the same issue – so one more fiddle with grub was required.

If for any reason you’re unable to get to the GRUB screen, you can boot into another live USB, mount the boot partition from your hard drive and edit the grub.cfg file directly to add the nomodeset option.

Fortunately, Fedora 34 didn’t have this issue – the live USB and subsequent installation just worked. Fedora is definitely more polished, which is what you’d expect from a distro backed by a big corporate! However, the problem appeared on updating the kernel from 5.11 to 5.13 – it rebooted to a black screen. Fortunately it keeps the old kernels, so I was able to reboot and choose the old kernel from the list. I was then able to use dnf to remove the old kernel. I then used the dnf versionlock plug-in to prevent the kernel updating again – but this isn’t enough as the GNOME Software Updater doesn’t seem to pay attention to this, and updated the kernel again! Adding exclude=kernel* to all the Fedora entries in the /etc/yum.repos.d/ directory did the trick. This is a bit hacky of course, but given you’re probably connecting to the internet via a router and not directly, missing out on kernel updates shouldn’t be a big issue. That said, it’s worth checking back in future to see if a newer kernel resolves the problem.

Another thing I noticed was that if I put the device in sleep mode – with a quick tap on the power button – it would resume fine if I returned to it within half an hour, but if I left it for longer it would ‘cold boot’ (as if it had been turned off) instead of resuming, and I’d lose anything I had open.

This seems to be related to Intel RapidStart – found in the performance/power settings in the BIOS – which is supposed to put suspended devices into a lower power mode to save battery while still enabling a relatively quick wake up time. Turns out it was set to kick in after 30 minutes of sleep! Whatever it was doing was preventing a successful wake from sleep, so I disabled it for now.

With Fedora set-up and working, and with LibreOffice already installed, I had a nice fast 2-in-1 tablet and laptop. Now it was time to wind down. I installed ScummVM (sudo dnf install scummvm), disconnected the keyboard, and curled up on the sofa for some retro gaming.

My next step will probably be installing a SIM card – since this Dell even has a mobile broadband modem! Not bad for an almost 7-year-old machine eh? If you’ve also been reclaiming old computers, please let me know in the comments – the more budget the better!